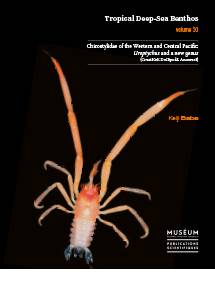 Tous les livres de la série Résultats des campagnes MUSORSTOM
Squat lobsters of the genus Uroptychus Henderson, 1888 and a herein proposed new genus Heteroptychus (Anomura: Chirostylidae) from the Western and Central Pacific are reported based upon the material now in the collection of the Muséum national d’Histoire naturelle, Paris. The material consists of 3,784 specimens distributed among 152 species in the two genera, including 100 new species of Uroptychus and six new species of Heteroptychus. Heteroptychus n. gen. is established for Uroptychus scambus Benedict, 1902 and eight related species including one western Atlantic species. Uroptychus edwardi Kensley, 1977 (now transferred to Heteroptychus), previously synonymized with U. scambus, is resurrected. The number of species of Uroptychus from the Indo-West and Central Pacific now stands at 219. One hundred twenty-six species of Uroptychus and six of Heteroptychus occur in New Caledonia and its vicinity (northward to the Solomon Islands, southward to the Norfolk Ridge, and eastward to Fiji and Tonga). Somewhat lengthy diagnoses are provided for previously known species in order to accurately characterize their specific status, and for some known species and new species, full descriptions are given. A key to species is provided for Uroptychus from the Indo-West Pacific and Central Pacific, and for Heteroptychus worldwide. For the purpose of elaborating on the specific status of a number of known species that were briefly described, their type materials were examined, and their characters are incorporated in the key to species.

Keiji Baba, professor emeritus at Kumamoto University, Japan, has been working with decapod crustaceans, focusing on the taxonomy of his favorite squat lobsters. He has also worked on stenopodideans and larval development of crabs and hermit crabs.
S'identifier pour envoyer des commentaires.